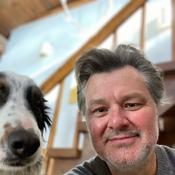 Dr. Chris Blazina is a licensed psychologist, retired professor, and award winning author. He has been in practice for more than 25 years working with a wide arrange of concerns including: depression, anxiety, life transitions, grief & loss, men's issues, relationship problems, and pet bereavement. He currently  practices in Albuquerque, New Mexico.

The foundation of his work is as psychodynamic therapist helping clients that had a difficult childhood where many still feel a lingering impact as an adult. The work in therapy is aimed toward finding resolution with underlying issues and building new ways of relating within important relationships and to ourselves. Dr. Blazina creates a therapeutic space to do this important work that is safe, caring, and warm. He is a certified in compassionate bereavement,  has an extensive experience in men's psychology and recognizes the importance of animal companions in our lives. Dr. Blazina has discussed these topics on over fifty radio programs across the United States, Canada and Australia  and has been interviewed by newspapers and magazines such as Huffington Post, Women's Health, and Men's Journal.

In addition to being a practicing psychologist, he has served as a professor at University of Houston, Tennessee State University and New Mexico State University. Dr. Blazina has published seven books including, "When Man Meets Dog" which received the 2016 National Indie Excellence Book Award for Men's Health.